When people talk about holidays, the usual suspects come to mind: Christmas, Thanksgiving, Independence Day, etc. Most people love holidays. For many, it’s a day off work. If you’re like me, and you work in a restaurant, however, then there’s no such thing.

Most holidays are celebrated nationally. The Fourth of July is a big summer holiday, with the fireworks and traditional patriotism. But where I live, in the state of Utah, there’s another July “holiday” that further cements the idea of the way religion has permanently permeated this state like no other, in my opinion. In fact, it seems to be bigger than Independence Day. It’s a day called “Pioneer Day”. It’s only widely commemorated in Utah because of the huge Mormon influence in this state, even though it sounds like a celebration of the high school I attended 30 years ago (coincidentally called Pioneer High School). This “holiday” takes place every year on 24 July. It rivals Independence Day in terms of its celebration in Utah, since banks and government offices close, and the lighting of fireworks is permitted. In Salt Lake City, there is a big “Days of ’47” parade, celebrating this day.

The history behind Pioneer Day is that it commemorates the arrival of the Mormon pioneers to the Salt Lake Valley on 24 July 1847. I can’t think off the top of my head any other place that has a local celebration like this. Sure, in other places, people of the Mormon faith remember the day, and they might have their own little goings-on, but nothing in proportion to some celebrations in Utah—parades, rodeos, fireworks all happen somewhere in Utah on Pioneer Day.

Mind you, not everyone in Utah is of the predominant religion. Though people of the LDS faith are taught not to partake of alcohol, there are those outside of that religion that like to drink. So, as a parody to the “Pioneer Day” thing, some jokingly call 24 July “Pie and Beer Day”🥧🍺. If I liked beer, I might join in🤷‍♂️. I really don’t care for beer, I guess it’s a taste I never really acquired. I’ll take some pie, though. Give me blueberry, cherry, or apple pie. I like them. You could classify Pie and Beer Day in the same group as the Christmas/Thanksgiving, non-celebrating people’s “Festivus”. Celebrations for people who, for one reason or another, don’t want to celebrate the traditional holiday things. Hey, to each their own.

Speaking of celebrations, there’s actually a petition online to get Halloween changed from 31 October to the last Saturday of October. Supporters say that there are too many accidents on Halloween during the week, that it’s hard to get kids up early the next day for school (boo hoo😭🙄), and that there would be less stress getting kids ready. I say to these people: what in the actual flying fuck?! Can’t these people just leave well enough the fuck alone? What’s next? Change Christmas from 25 December to the last Sunday of December, or move Independence Day from 04 July to the first Saturday in July, just so people can celebrate it more? For god’s sake, people! Leave my calendar the fuck alone! Go suck it up buttercups! There’s a reason Halloween is 31 October. The first day of November is known as “All Saints Day”, followed by the Day of the Dead in many places, and the night before is All Hallows Eve, hence Halloween. You change that, and you change the entire meaning of this pagan tradition. I personally don’t wear costumes that day, mostly because I’ve never been to a Halloween party (nor ever even been invited to one), along with the fact that my face is already scary as it is. I don’t need a mask to scare the shit outta someone—just have to look at them to frighten the bejesus out of them. Hell, I make Shrek look like a fashion model. Anyway, I haven’t put on a Halloween costume since possibly before high school. I just don’t have any such spirit. The same actually goes for Christmas. I give gifts, but I really don’t get into the whole tree and decorating thing. I let others in the house in charge of that department. If I lived by myself, I wouldn’t ever bother with it. As I mentioned back in November, in post 17, “The Most Wonderful Time of the Year?” many holidays, especially Christmas, are over-commercialized and have predominantly lost their meaning. How can one get excited about a holiday where everyone is pressured to overspend, and once the excess number of gifts are given, most of the gifts are promptly returned to the retail vendor? If Christmas is supposed to be a commemoration of the birth of Christ, why in the hell has some mythical fat guy in a red and white suit, who drives a sleigh guided by eight (or nine) flying deer, who somehow magically delivers presents to billions of kids in the whole world, who is compared to God (“he sees you when you’re sleeping, he knows when you’re awake”—sounds downright creepy and stalkerish to me). How in the name of Hades has this taken root in society? I get it, not everyone is religious or believes in Jesus or whatnot. Why the over-commercialization, to the point where retailers send subliminal (and not-so-covert) messages, that people have to spend in excess of their annual income on gifts, maxing out all their credit cards, then spending the following 11 months paying the balances off, just to repeat the cycle the following year? When did the almighty dollar dominate the holidays?

Seems like I got off on a tangent there. Back on track! The whole Pioneer Day thing is one example of how Mormonism controls nearly everything in Utah. Another way? The Utah state legislature is contemplating a redesign of the state’s flag. It currently look like this: 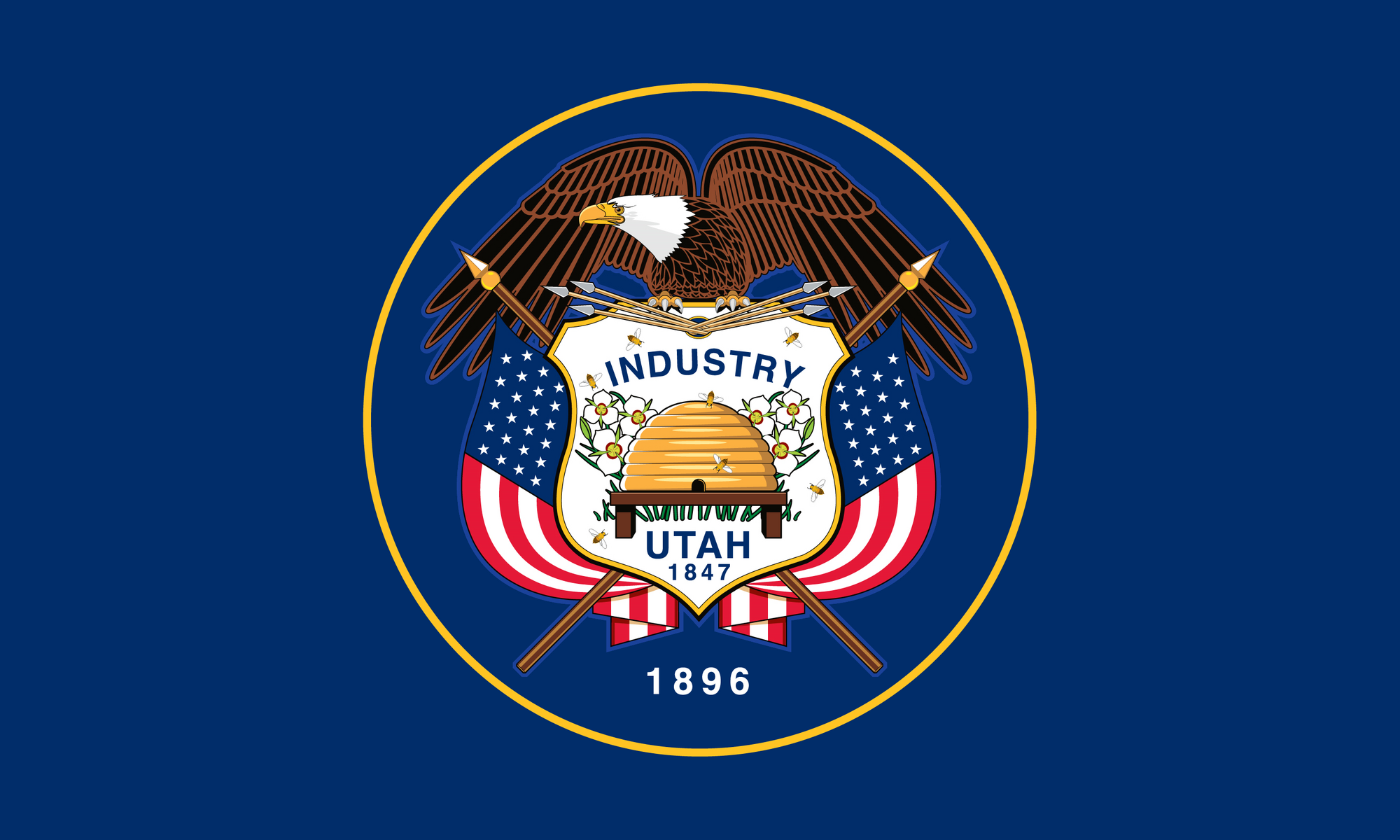 It shows the state’s beehive symbol, an eagle, and the year of statehood, 1896.

One idea for a redesign that was floated was this:

This one shows merely a beehive and 1847, the year of the Mormon settlers’ arrival. People could easily get confused and think that was the year of statehood. It is utterly dripping with Mormon symbolism. Again: leave well enough alone! Utah lawmakers didn’t decide on anything yet, but let that idea die, would you please? Just because the state is all-things LDS, the flag doesn’t need to be.

There you go, just another of the quirky things that Utah is possibly not well known for. Some people get twice the celebrating here, others, like me, just end up working, not knowing or even caring about what holiday is approaching. Must be nice to work in a bank or for the government. They get so many guaranteed days off. I am only guaranteed Christmas Day. Enjoy your Pioneer Day (or Pie and Beer Day, whatever works). Oh, wait, it’s already passed. Okay, whatever day is next, go celebrate it in whatever way you see fit. In your celebrations (along with everything else), be safe and be well.