Once again, I’ve decided to inject something light, but insightful into my blog. This week, I answer some light-hearted questions that have no single correct answer. Your answers might or might not match mine, but that’s a good thing either way. Now, let’s do this thing.

What is something that everyone looks stupid doing?

Among other things, dancing to “Macarena” or “Gangnam Style”, or dabbing. You definitely look stupid doing those things. And don’t forget most people’s asinine videos shared on TikTok.

In 40 years, what will people be nostalgic for?

Common sense, such as not having to tell grown-ass adults to stop eating laundry detergent or Flex Seal, and that they need to wash their hands. Seriously, though? Flex Seal🤨? If these dumbass mother fuckers are killing themselves by consuming a waterproof sealant, then they deserve to be candidates for the next Darwin Award👏. 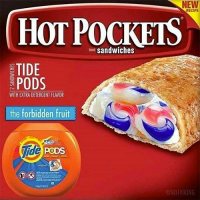 What are some things that are okay to do occasionally but definitely not okay to do every day?

That depends on who you ask. Fasting is a big one, if that’s something you’re into. You have to eat sometime. Of course, there are those who think that self-pleasuring should be on that list. To each their own, I suppose🤷‍♂️.

What is the weirdest thing you have seen in someone else’s home?

What is the most embarrassing thing you have ever worn?

I honestly don’t remember. I have worn my shirt inside-out more than once.

What set of items could you buy that would make the cashier the most uncomfortable?

If it’s something you’re inclined to, you could buy condoms, whipped cream or Jell-O and some type of binding device and whip.  If I were the cashier, I’d definitely have a disconcerted feeling about those items.

What’s the best type of cheese?

It depends on the food, but just about anything other than that fake-ass American “cheese” shit. Cheddar, Colby-Jack, Swiss, anything natural. Fake cheese is just 250% gross.

In one sentence, how would you sum up the internet?

A place where the sheeple get their daily dose of memes and mis-/disinformation, to be shared so that everyone can be indoctrinated into the ways of the eventually-unified single world government.

California would probably be avocado toast or some gross Vegan food substitute. Utah would definitely be “fry sauce” (an abominable conglomeration of ketchup and mayonnaise). 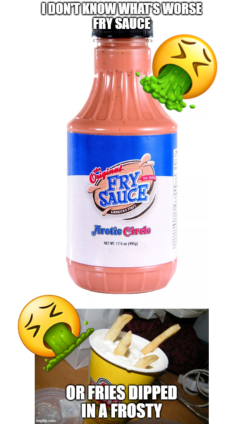 What are some of the nicknames you have for customers or coworkers?

Most of them are profane, and would make a sailor blush. But hey, if “locker room talk” offends you, then you’d be appalled by kitchen talk (it’s many times worse).

What would be the absolute worst name you could give your child?

Anything that takes a rocket scientist to decipher. In other words, many names given to kids in Utah. What about JKMNO (“Noel”) or SSSS (“Forest”)?

What would the world be like if it was filled with male and female copies of you?

God help us if that were the case. One of me is already more than necessary. Billions of me would cause the world to self-destruct, not to mention puke before that from beholding the sheer ugliness of the face.

What’s the weirdest smell you have ever smelled?

The meat cooler at Golden Corral is high on the list. Golden Corral has three separate walk-in coolers: one for the bakery, one for produce and one for only raw meat. Walking into the meat one, you get nose-punched by the combination of smells of raw beef, chicken, turkey, pork and fish. I can’t begin to describe it, but it’s undeniably strange.

Which body part do you wish you could detach and why?

Sometimes my right arm due to the rotator cuff injury that has plagued me for about 7 years now. My arm hurts on the daily, reaching with my dominant arm is excruciatingly painful, and I take Ibuprofen daily to make it possible to work decently. Unfortunately, I have to deal with it, since I neither have insurance nor the money to pay for surgery, and then I can’t afford to take the time off work to recover😔.

What’s the weirdest thing a guest has done at your house?

Not that anyone really comes over—except maybe my kids’ friends. One of my oldest son’s friends stole an expensive pair of headphones from the house once. That was recovered the next day. He was no longer allowed upstairs after that.

Who do you know that really reminds you of a character in a TV show or movie?

I actually compare myself to Squidward. If you know me, and have watched Spongebob, then you know I’m absolutely right.

How do you feel about putting pineapple on pizza?

In a word: yum🤤. I love Hawaiian pizzas. Pineapple helps cut the tang of the pizza sauce. If you’re like Gordon Ramsay and think pineapple shouldn’t be on pizza, then we agree to disagree.

What’s the most imaginative insult you can come up with?

“Please go and consume a satchel of Richards.” I’ll let you figure out what that means in the vernacular. 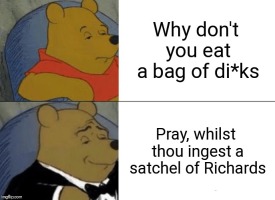 If you were arrested with no explanation, what would your friends and family assume you had done?

My coworkers would probably think I went and killed a customer that ordered their steak well done. My family would be baffled, as I never go anywhere or hang out with anyone.

I guess that was a version of 20 Questions, only without the “yes” and “no” answers. When I don’t have something I can rant about, that’s what we do. We can’t be 100% negative, can we? It’s now time to venture off into another week of mundane work and life’s negativity. Just remember not to take everything too seriously, live one day at a time, and while you’re at it, be safe and be well.

Also, don’t forget to go check out my other blog where I upload a new post daily, over at preposterousponderings.net. Clicking the link will open a new window.