The last week of May was a really heavy week. Starting with the death of George Floyd by the hand of a police officer in Minneapolis (actually, it was by the knee), leading to riots, looting and nationwide protests—some peaceful, others not so much so—you see people at those protests holding signs with different messages, such as the “Black Lives Matter” slogan or “I Can’t Breathe”, referring to Mr. Floyd’s inability to breathe, due to the cop’s knee square on his neck.

I’m not at all trying to make light of the seriousness of the situation in this post, nor am I entering to any discussion of the whys and wherefores right now. There has been so much this year, so much tragedy, that I wanted to try to bring a little humor to brighten your day a tad. I wanted to present some funny and light-hearted protest signs. Hopefully you’ll get a chuckle out of some of them.

Now there’s a cause I can get behind. People need to stop putting up Christmas decorations as soon as Halloween is over. Let each holiday have their turn!

MY ARMS ARE TIRED 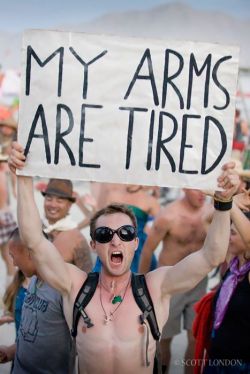 I’m sure your arms would get tired if you had to hold up a sign, screaming and shouting all day.

I WAS TOLD THERE WOULD BE CAKE 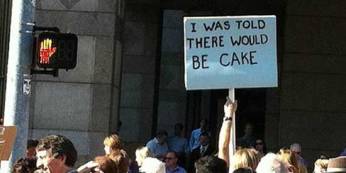 I guess that’s one way to get people out to your protest or march. Promise them some cake!

I WAS PROMISED DONUTS

And there’s another way to bring them out—pastries and baked goods. Sounds good to me—give me some donuts!

SHIT IS FUCKED UP AND STUFF

And the award for most specifically vague sign goes to this woman. When you’re really not sure why you’re at a protest, this is the kind of sign you make to cover your ass. Cuz shit really is fucked up…and something-or-other.

I AM A LITTLE UPSET

Of course, in Canada or England, you’d see a rather polite sign like this one. A sign whose size is directly proportional to the degree of anger you feel.

WHAT WOULD OPTIMUS PRIME DO 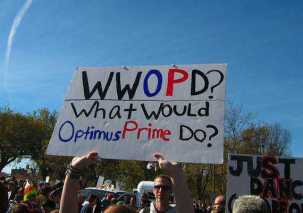 I find myself asking this question more and more this year. What would Optimus Prime do in a situation like this week? We could really use someone like that to run this country. Just a thought.

I WANT MORE TORTILLAS WHEN I ORDER FAJITAS AT A RESTAURANT

We interrupt your protest for this newsflash: Mexican restaurants are cheating us out of tortillas! We need more tortillas when eating fajitas, dammit! Oh, imagine having to eat peppers and onions and not be in a tortilla! Oh, the tragedy! First world problems, much? 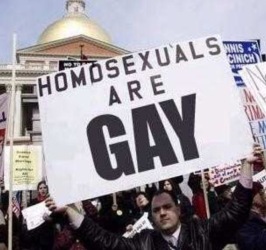 Oh, well, here’s a sign from Captain Obvious. It’s great how he made a coherent sentence from fact. Um, last time I checked, homosexual people were gay. I don’t think that’s changed all that much. Unless, of course, I’m in some kind of parallel dimension now🤔.

It seems to this dude that whomever is against gay marriage is a fan of Nickelback. Talk about a low blow. If someone accused me of actually liking Nickelback, that person might find themselves on the receiving end of some foul insults. If I had to choose between being forced to listen to either Nickelback or Justin Bieber, I think I would opt for either suicide or permanent deafness.

Yup, that’s how you show you’re really angry about something: make a sign that says you’re angry. Nothing says “I’m pissed” more than a generic sign. Kudos.

I ALREADY REGRET CHOOSING TO CARRY A SIGN AROUND ALL DAY

Well, no one held a gun to your head when you brought that sign, now did they🤦‍♂️? And what made you think that a heavy white board was the best option? Is that your miniature and analog version of an electronic billboard? Change your message as you see fit🤨? Should’ve went with the cardboard, buddy🤷‍♂️.

WHAT DO WE WANT? TIME TRAVEL  WHEN DO WE WANT IT? IT’S IRRELEVANT 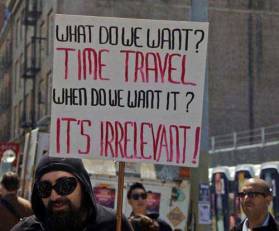 Okay, are you protesting time travel or asking for it to happen? I’m a little confused. I’m sure that will give someone the incentive to figure it out.

SO BAD, EVEN INTROVERTS ARE HERE 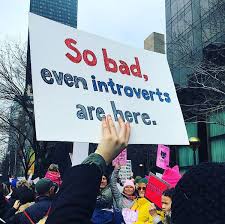 Anyone who knows an introvert understands that most of us hate being in crowds or the center of attention. We can do it, but it’s not our favorite activity. So if an introvert actually decides to go to the middle of a huge throng of protesters, you know something is seriously fucked up.

I hope this brought a little bit of humor or comic relief to your minds overburdened with all the serious goings-on of late. Now more than ever, please, everyone out there, be safe and be well.